The Oculus Rift has become quite popular since it was invented in 2012 and I can see why it would be. Who wouldn’t want to experience gaming in this new and exciting way? However, a lot of people changed their stance on the Oculus Rift on the 25th of March 2014. Facebook had already announced that they were going to buy Oculus VR and paid them $400 million in cash, an additional $1.6 billion in Facebook stock and finally another $300 million for Oculus Rift to meet certain financial targets.

There are the investors of the product who are now rolling in money and have been defending the purchase, obviously. The most prominent is probably Cliff Bleszinski who is the former design director at Epic Games who defended the Oculus Rift from Notch (Markus Persson), developer of Minecraft who initially stated that Minecraft would be ported to the Oculus Rift, however he cancelled that plan due to disliking Facebook and finding it weird. Cliff responded by calling Markus “immature and pouty kid who’s taking his ball home with him”, which is completely true. 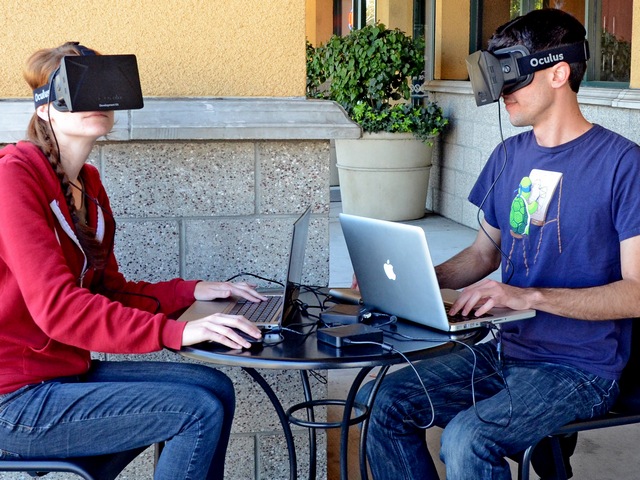 I don’t think anyone will play it like this.

So why is Facebook buying Oculus Rift not the end of the product you might ask? Well it’s evident that the people at Facebook are smart people, I’m sure they noticed the hype surrounding the Oculus VR and thought that they’d like to cash in on the product and I’m sure they saw the potential that this product held. They’re much more able to get word out about Oculus VR than any YouTuber or investor, with the use of their social media platform they’re able to reach out the Oculus to tonnes of people who might be remotely interested in this concept.

I’ve heard people claim repeatedly that Facebook will slap their name all over Oculus VR, which I highly doubt they will because they would probably want to avoid enhancing the criticism that they’ve already received thus far. Even if they make you sign in to upload scores and what not, why would anyone care? There are plenty of games that allow you upload high scores onto Facebook and Twitter. Additionally I’m sure everyone has a Facebook account so why would anyone care to such a point where they’ll refuse to buy the Oculus Rift? This has annoyed people to such an extent that the founder of Oculus VR has received death threats.

Now I’m not an apologist for Facebook by any means, because there’s a different killer that isn’t Facebook and I don’t know why people realise this. I’m sure fans of Oculus VR are confident that everyone will own this system, and yes, I can see that happening, it happened with the Wii didn’t it? It actually sold more than the Xbox 360 and PS3 last gen, but now it’s the most expensive paper weight I’ve ever bought and I think this will end up happening with the Oculus VR. It’s going to be this generations gimmick, like how motion controls were. They were over-hyped and now everyone hates it, and Microsoft and Sony cashed in as well with Sony’s motion controllers and Microsoft’s Kinect. Sony has also started their own VR project called Project Morpheus; Sony’s answer to Oculus VR, it’s just a matter of time till Microsoft does it, unless they continue to beat the dead horse which is the Kinect.

I’m not saying that the Oculus VR is going to be as much as a flop as 3DTV’s were, but I think the expectation is far too high for it to succeed the way people say it will. I’m sure it will find more use in the educational field in the way of simulators instead of games, I’ve used the Oculus VR before and it is quite an astounding piece of technology and I’m not ignorant about the platform because it’s the best that virtual reality has been. So in the end, I think it’ll find an area of use outside of gaming like a driving simulator or flying simulator and other commercial uses, but not in gaming.

Michael Pachter May Have The Best Job In The World