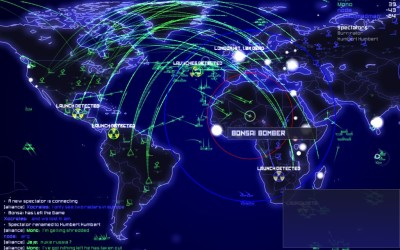 So the world never ended in 2012 in the zombie apocalypse we all hoped it would, but now in 2013 the current gaming generation will. After 8 long years with our consoles of choice we have been treated to some of gaming’s greatest achievements, and some of its greatest fails (Duke Nukem Forever will be remembered forever but not for the right reasons.) Developers are now concentrating on their next gen spoils and we face a rare and odd time in the gaming community. So far this year we have been fed some sub-par titles at full retail price, games like Aliens: Colonial Marines and The Walking Dead Survival Instinct are hardly classics to be reminisced about 10 years down the line. With a few exceptions like Bioshock Infinite and GTA V its going to be hard to find value for money this year , this combined with current and next gen ports like the eagerly anticipated Watchdogs shows a shift of focus from impressing the 140 million plus current gen console gamers.

Fear not though as due to the longevity of the current generation and the rise of the indie market there is plenty of quality content out there that went under the radar and can now be picked up for only a few coin. We could still save 2013 yet and while we continue to fork out ridiculous prices for rushed, under developed content I ask the question Why Aren’t You Playing?

Way back in 2006 we were all so hyped by our shiny new consoles with HD graphics that many of us missed out on this under-appreciated PC title Introversion’s DEFCON Everybody Dies. Loosely based on the movie WarGames, Defcon is a thermo-nuclear war simulation built into a simplistic strategy engine and it’s within this simplicity that makes the game so memorable and above all else fun for both new comers to the genre and veterans. Straight off the bat the minimalistic graphical interface will grab your attention a neon lit world map is your base of operations as you choose your territory out of a possible six to defend whilst you wreak havoc upon your enemies. Within your chosen territory before you build anything is your major cities and population centres these are the areas you must defend the most as the main objective in Defcon is kill as many people as possible with the nuclear weapons you have at your exposure. 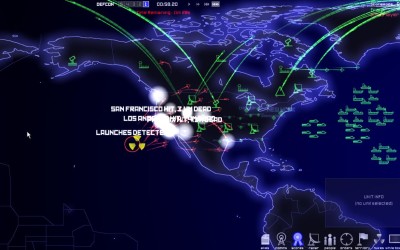 The game is played at a slower pace than most strategy titles and again this helps feed into the atmosphere the game creates. Units you can create include radars, missile silos, air bases and ship fleets although there isn’t much variety here each unit has multiple functions and how and where they are deployed is key to success. Most units have a limited supply of weaponry and can be used either defensively or offensively, choosing when and where to strike is a strategy you will need to work out for yourself. Do you dedicate a wealth of missiles towards a big city in the hope that a few get past enemy defences to score a few million kills? Or aim to take down enemy instalments to limit they’re fire power and attack their now vulnerable cities? There are several ways in which to defeat your opponent in Defcon but watching an Inter Continental Ballistic Missile arch across the world map in radar green, slip through enemy defences an explode in a white flash over a major city is satisfying and eerily cold and removed as the words Shanghai Hit 8.1 million dead appears on screen only to fade away like the devastation you have just created. Defcon really creates a tense dark atmosphere especially when accompanied by the sound track. Not so much music as it is a collective of instrumentals made up of low radio chatter, screams, computer blips, the hum of recycled air and a low hollow wash of sound. The sound on its own contributes so much to the mood it will make you ponder the realities of a nuclear holocaust.

Gameplay itself offers some variants however it does lack a traditional single player campaign. It’s not a Star Craft killer but there is still enough here to keep you engrossed in nuclear genocide for many hours. Outside of a straight up skirmish with up to 6 AI or online opponents there is an office mode. This mode can be instantly minimised by pressing escape, runs with no sound and runs exclusively in real-time, a single game will take around six hours to complete. Also on offer is Speed Defcon that is ultimately the same as Office but runs at an accelerated pace making games last around 15 minutes. Diplomacy starts with all players in an alliance and able to see each other’s units, this in turn initiates a game of chicken to see who will break away first and begin the all out war. Big World stretches out the length of a game but halves radar capabilities and boosts available units. Outside of these pre set modes players can tweak the winning variables anything from not penalising territories for deaths to limiting the number of territories players can hold. For a game with no single player campaign there is an incredible depth to Defcon and makes playing it with friends a pleasure.

All in all DEFCON Everybody dies is available on Steam for as little as £5.99 accompanied with a free demo for download, and with its wealth of content and unique vision and style makes it hard not to recommend it to anyone.

World of Warcraft: Worth Playing Now?

Most Anticipated Games of 2014 by Tripp